In Boston twelve Eikomi students are engaged in some exciting learning. They are studying various business related topics, and doing so in ways that are extremely stimulating. When I joined them to see what they were up to we went on a site-visit to United Planet, an organization that, through facilitating opportunities for young people to volunteer abroad, “strives to create a world in which all people can understand, respect, and support one another.”

After a walk on a beautiful sunny day through the Boston Common back to the AIC offices and a quick lunch we joined a class where the students heard a guest lecturer, Keith Hopper, one of the founders of the Awesome Foundation and a mentor at Techstars, tell about what those organizations–both of which exist to encourage new ideas and innovation–do, and how they got started. Students were most interested in the Awesome Foundation, in part because the structure of the organization is unusual. There are no bosses, no employees, and the foundation doesn’t exist to make money. Instead it exists to give money away. It is made up of ten friends who each contribute 100 dollars a month. Each month they put that money together and give the 1000 dollars, no strings attached, to someone they think has a good idea.

Who know? Maybe one of our students will get together with nine friends and start a Japan-based chapter of the Awesome Foundation. There are chapters in many countries, but not yet in Japan.

Or even better: maybe one of our students has a good idea of her own and will propose it at the Awesome Foundation’s website. If her idea is interesting enough she might get 1000 dollars to make her dream a reality. 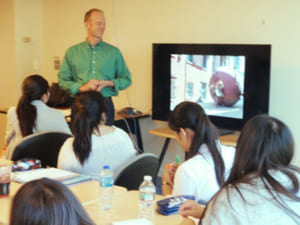