Today I had the pleasure of teaching a demonstration English class to 71 students of our associated high school. The functional focus of the class was on how to correct people politely, with the grammatical focus being a review of the verb to be and other basic verbs in their present and past forms, and the auxiliary verb might. Thus the class featured relatively simple structures to achieve a nuanced, situation-based communicative aim. 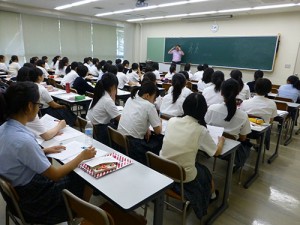 If your brother or sister says “Haruki Murakami is a great ballet dancer”, you might simply say “No, he isn’t. He’s a writer.” But what if your boss at a new job were to say something mistaken, and what if the mistake was related to work? Or what if you’re in a customer service job requiring English and your customer has an incorrect impression of something? The language you use needs to suit the situation and your relationship to the person, and English, like Japanese, has polite forms of language to deal with this.

After explaining this to the students, I gave them a number of obviously wrong statements related to basic history, geography, and popular culture, and elicited correction both direct and polite, e.g.

“I love Mexican food, especially sushi.”
“Sushi is Japanese, not Mexican.” (direct) / “Actually, I think sushi might be Japanese.” (polite)

This practice was followed by version of the popular Japanese folk tale Momo Taro told by me with many inaccuracies. The students were asked to politely correct my mistakes, e.g.

Teacher: Momo Taro went to Onigashima by Shinkansen.
Student: Actually, I think he might have gone by boat.

The students were very enthusiastic and participated well.
I very much enjoyed teaching the students of SWU High School and I hope I will have the opportunity to teach them again at the university in subsequent academic years.